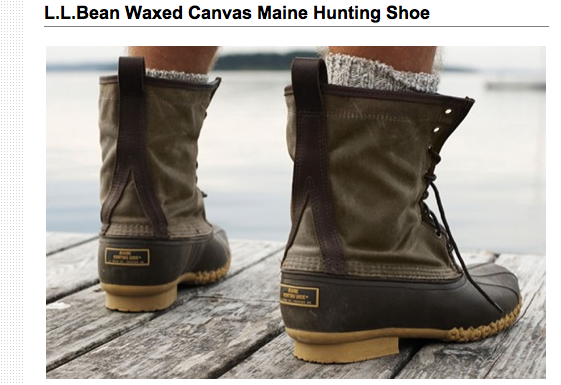 I spotted these boots the other day on uncrate.com and admittedly got a
little twittery. The Maine Hunting Shoe had quite an effect on me. Loving
the thick socks, the hairy legs, the Northeastern nod that I often miss so
dearly. Happily spoken for, I was never the girl that went gaga for the guy in the
fancy suit and Gucci loafers- there is nothing better than a man in jeans
and a tee shirt. Or hunting shoes and bare muscular legs. Full stop. If you
have very gangly limbs or an unearthly pallor, don't wear these. If you'd
like to know what type of man should be wearing these, then read on.

The man in this shot is probably named Dean. He has never heard of Fred
Segal but that's straight with me. He probably has a limited repertoire of
things he likes to make for dinner, but they're all solid, tasty, and
comforting. Perhaps he played rugby in high school or was on crew, but was a
bit too much of a lone wolf to be a true team player. He grew up in New
Hampshire and dropped out of college to find himself and did some deep sea
fishing in the Keys for a minute. He has read Hemingway but thinks he's a
bit overrated. He doesn't really cry, but did tear up while watching
"Brian's Song". He doesn't put product in his hair and his boys are jealous
of how evenly he can grow a beard. He smells like your freshman History
professor. He is a huge fan of Jeff Bridges, especially as the Dude. He
likes girls who wear flimsy sundresses. Lately he's rediscovered how great
The Modern Lovers are, hell the whole Beserkely canon in general. He's
hanging at his parents house in Maine in this shot- it's fall and he's
wondering why the hell he hasn't met you yet. His sense of humor is not
immediately evident, but after a couple of Makers and gingers, it will take
you by surprise. He loves America but is curious about the peculiar foods of
Japan, though he finds Andrew Zimmern insufferable. (A plus). He is vaguely
aware he is a bit of a cliché, but he's cool with that. Now go and tap him on the shoulder and get him to look away from that lake
with that broad smile of his which will warm your jaded urban heart. He did
not buy this shoe with you in mind, but is pleased to have your full and
rapt attention. Now that he does, it's up to you to fill in the rest... Long live the rugged Northeastern man with nice legs. Thanks LL Bean for the
inspiration- most shoes don't have it in 'em to do that to a gal. To all my
single female friends- go find him and see if all the above is true. I hope
you send me a picture from your wedding, which will probably take place on
this very dock. (On preorder at LL Bean...limited edition. $129. Run.)