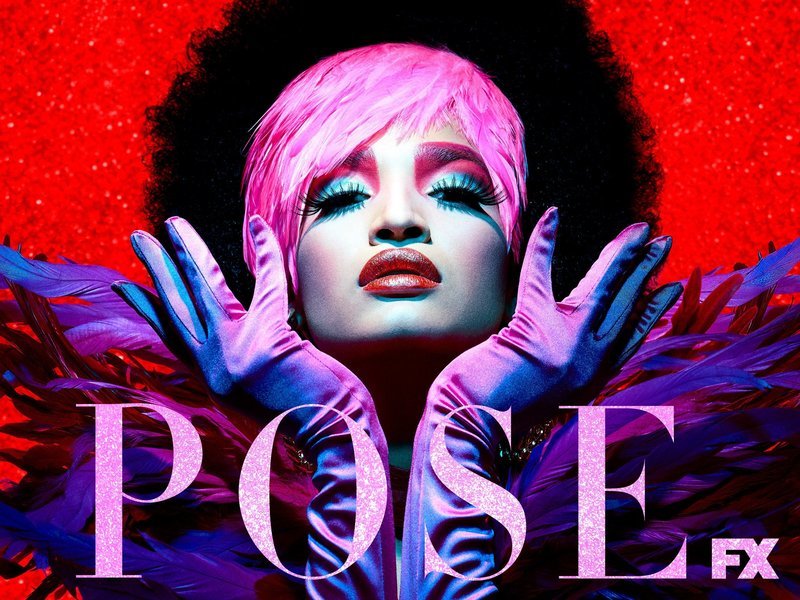 Good morning, Monday. I hope you had a wonderful weekend- the weather here in New York was just too perfect. And Khan even got to see an old friend and hang out in the park with the sun on his fur face. All in all, a lovely couple of days.

So last week I did some more binge-watching, this time the entire first season of FX's "Pose," the brilliant look into the trans world of New York in the late 80s. Created by Ryan Murphy of "Glee" fame, this show is absolutely hands down one of the most touching and entertaining shows in recent memory.  And the acting is transcendent- I now know why Billy Porter goes so big at awards shows.

The show focuses on the uptown ballroom culture depicted in movies like "Paris is Burning," but examines the family dynamic, which is the most tender part of the show. As crews or "houses" perform at the balls with a theme, they also live in houses together as a family. The "mother" of each house keeps her children safe and provides a stable environment for them. Understand that many of these kids are found on the street, kicked out of their homes for merely trying to live their truths. The story also follows the often sad dynamic of finding love as a trans woman. These are not easy lives, and to live them with the AIDs crisis as a backdrop is even more heartbreaking.

As a member of a generation who sexually came of age during the AIDS crisis, it's hard to explain how terrifying and horrific that time was. I lost my cousin to AIDs, and I can't think of many people who don't know someone either close to them or somewhat more distant that lost their lives to this horrible disease. And because I grew up in a family where there were gay men, I felt strongly from an early age that acceptance was an unnegotiable right. And that being free to love who you want to love and be who you want to be meant everything. How could you deny anyone the right to love and be loved? And why must I still ask the same question I was asking a million years ago?

But lest you think the show is super sad, it's not. There are tear-jerking moments for sure, but there are also happy jubilant ones. It shows the critical relationship of what it means to be a mother- to protect, to nurture, to accept and love unconditionally, which got me thinking. That New York City is the mother incarnate. For many people from all walks of life and persuasions and preferences who come here looking for acceptance, to live their dreams, and to live fully out loud precisely as they are. And even though this city has become more of a hedge funded theme park than a place where originals are born and raised, it's still in the ether.  And I hope that never changes. And sure, mothers can be cruel sometimes. But tough love is often part of a life well lived. So we deal.

When I moved from Philadelphia to New York, I too felt loved and nurtured in a way I never had before. I always referred to New York City as a giant womb state. I somehow feel safe, protected, and warm. I know that may be strange to some who find city living anything but, but that's the way New York has always been for me. And as someone who never felt entirely at home growing up in the 215, I felt great joy and relief when I moved here way back when.

And as I took a walk downtown on the way to a meeting last week, I saw those Pride flags flying and felt a deep sense of relief. That I live somewhere where we can be the best versions of ourselves, which is who we want to be.  The second season of "Pose" starts tomorrow night, and I'll be tuning in and laughing and crying and loving all the dance moves and incredible looks. But today, I remain grateful to a city who mothers us all and keeps us motivated, inspired, and alive.  New York is not just a city. It means so much more to so many of us who came here in search of something better: the tired, the poor, and the fabulous.

Cause that's what's up this lifelong love affair kind of Monday in the best city in the whole damn world. Yours, in living your dreams and being perfect just the way you are. XO